We use cookies to make your experience better. To comply with the new e-Privacy directive, we need to ask for your consent to set the cookies. Learn more.

10% Off Your First Orders

When you create an account with us. You must be logged in to claim your 10% discount (on orders over £30)

On order over £50. UK mainland Only. Orders must be placed before 4:30pm, Monday to Thursday to qualify.

you have 90 days from the purchase date to return the item(s) back to us for a refund. 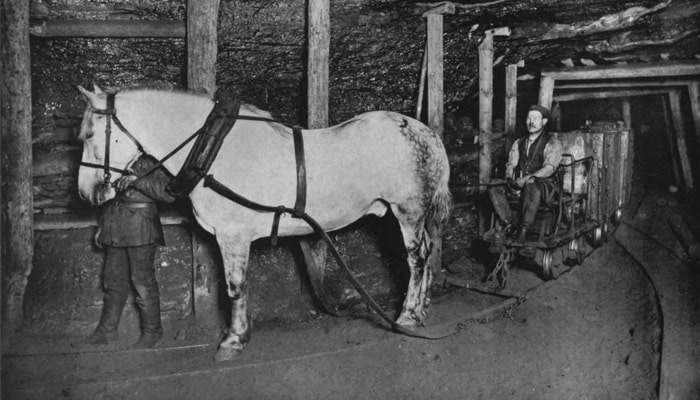 Pit ponies were first used down the mines in Britain as long ago as 1750. At one time, around 70,000 of the miniature horses worked underground, even living in stables in the pits and seeing daylight only once a year. The practice of using pit ponies finally ended in the last decade of the 20th century, after 250 years.

The ponies were used to pull the heavy carts of coal, as their small yet sturdy stature enabled them to move through the cramped conditions in the mines. Although ponies were commonly used in the UK, it was more usual to use donkeys and mules in the mines of the United States. 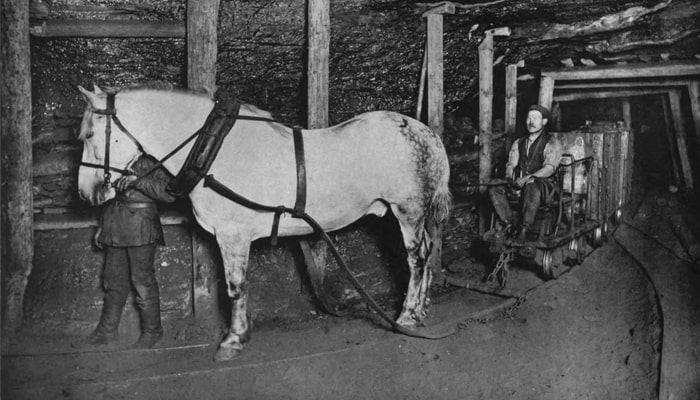 Where was the first pit pony used?

According to historians, the first pit ponies were sent underground in 1750 at the Durham coalfield in northeast England. This wasn't a widespread practice in the 18th century, when it was more common for children as young as eight to work in the pits.

However, a tragic accident in 1838 led to the large-scale replacement of child workers with pit ponies. A flood struck at the Huskar Colliery coal mine, in Silkstone, Barnsley, on 4th July - drowning 26 children who were trapped in the depths of the mine. A violent thunderstorm and torrential rain put out the boiler used to power the pit's operations.

Coal was transported to the surface by steam engine, as were the mine workers. Around 40 boys and girls were trapped at the bottom of the mine for nine hours. They tried to make their own way out via a ventilation shaft leading to Nabbs Wood. However, a stream burst its banks and flooded into the shaft, drowning all but 14 of the children.

The national tragedy led to Queen Victoria demanding an immediate inquiry. This led to the Mines and Collieries Act 1842, which banned children under the age of 10 and women from working underground in the coal mines. Although it saved young children from being exploited in the difficult working conditions, it led to a shortage of staff for the mine bosses.

The solution was to increase the number of pit ponies, which continued throughout the 19th century. By 1913, an estimated 70,000 ponies worked down the mines.

Did pit ponies have a hard life?

The pit ponies' main duties were pulling heavy carts of coal, so they had to be strong and sure-footed to avoid stumbling on the underground paths. On average, they worked an eight-hour shift daily, hauling around 30 tons of coal to the underground railway.

Sadly, in shaft mines, it was difficult and time-consuming to get the ponies underground. Early 19th century drawings show the pit ponies being tied by leather straps to a gravity-defying lift that was then lowered down. Others were lowered down in a cage-lift, often one-by-one.

To prevent this from having to be done every day, the ponies were usually stabled underground. They were commonly brought to the surface only once a year during the colliery's annual holiday. If there was ever a strike at the mine, the ponies would all have to be brought out.

Ponies in drift and slope mines were a little luckier, as the stables were often at the surface, near the mine entrance, so they could feel some fresh air and it would be easier to get them out quickly if necessary. In the bituminous collieries of Wales, the ponies were often stabled above ground. They walked in and out of the sloping mine tunnels and didn't have to endure the lift.

Were they well looked after?

In the early years, there appeared to be little official legislation relating to their well-being. Obviously, they would have to be fed well and kept in relatively good health, or they wouldn't have been able to carry out their duties. Their diet had high proportions of maize and hay to keep their strength up.

However, despite pit ponies being used since the mid-18th century, the first legislation to protect their welfare wasn't introduced until the British Coal Mines Regulation Act 1887 became law - almost 140 years later.

In 1904, the Association for the Prevention of Cruelty to Pit Ponies gave an award to young miner John William Bell, of Elsecar Colliery, near Barnsley. He received the Fitzwilliam Medal for Kindness for saving his pit pony's life after a group of miners became trapped underground.

While most of the human workers escaped through a small opening, Bell chose to stay underground with the pony - giving it a better chance of rescue because a human employee was with it. His gamble paid off and they were both rescued. His act of bravery was used by the PCPP in its ongoing campaign to promote better treatment of pit ponies.

The Pit Ponies' Protection Society was launched in 1908 by Francis Cox, an animal rights advocate. It later became the National Equine Defence League. The Scottish Society to Promote Kindness to Pit Ponies was launched at a similar time north of the border.

A Royal Commission study in 1911 detailed the harsh conditions in which the pit ponies spent their life, resulting in greater protective legislation - especially after it came to light that the average working life of a mining pony was only three-and-a-half years, compared with 20-plus years on the surface.

The same year, outspoken animal welfare advocate Harry Lauder pleaded the pit ponies' case to Winston Churchill MP at the House of Commons. Lauder, a Scottish music hall entertainer, had worked as a miner at Eddlewood Colliery between 1884 and 1894, before becoming a popular singer.

He was no stranger to the hardships of life underground, having been personally trapped by a collapse of the mine shaft when his boss was killed. Lauder managed to summon super-human strength to save the life of another workmate by lifting a huge stone that had pinned him down.

Following his own experiences, Lauder became a campaigner for the pit ponies and described them as his "wee four-footed friends". Being famous as an entertainer by the early 20th century, he gave interviews to the newspapers, saying he could "talk for hours" about the ponies and their hard life.

He told the Tamworth Herald the time had arrived to improve the working conditions of the "equine slaves" who carried out Britain's "great mining industry". Lauder told the newspaper he felt he had convinced Churchill that something must be done using the "law of the land".

The British Coal Mines Act of 1911 led to much tougher laws to protect the ponies. For the first time, a minimum pony age of four years was stipulated. The ponies also had to be vet-checked and shod with proper horse-shoes before going underground. Prior to this, there had been no real health checks carried out, unless the ponies actually fell ill.

When were ponies last used in the pits?

Despite the advent of modern technology and machinery, pit ponies were still widely used throughout the 20th century. By this time, the National Coal Board, taking heed of animal welfare campaigners and the legislation, strictly monitored how the ponies were used and treated.

On the whole, most ponies were paired up with one regular miner and handler, so they could build a close bond and a trusting, long-term relationship. They slept in clean stables, had plenty of corn and hay, a constant supply of fresh water and worked fewer hours as they grew older.

Gradually, over the years, fewer pit ponies were used. By 1984, it was reported that only 55 pit ponies were left working in UK mines, mostly at the modern Ellington Colliery, in Northumberland. When the pit ponies were due to retire, the RSPCA was instrumental in finding them a home to live out the rest of their life.

After Ellington closed in 1994, there were only four pit ponies still working there. Two went to spend their retirement at the National Coal Mining Museum in Caphouse and the other two went to Newcastle Cat and Dog Shelter. One of the last surviving pit ponies from Ellington was Tony, who died aged 40 at the Newcastle shelter in 2011.

In February 2019, a special event was held to commemorate 25 years since Marley the pit pony retired from Ellington Colliery. Members of the public had the chance to meet Marley and ask questions of the event organisers about the history of pit ponies.

Some sources state that the final pit pony to be employed in Britain was Robbie, who retired in 1999 from Pant y Gasseg Coal Mine in Pontypool, Wales.

For everything you need to care for your horse, visit Griggs Equestrian.  Browse our affordable equestrian products online or visit us in person at our St Austell store.